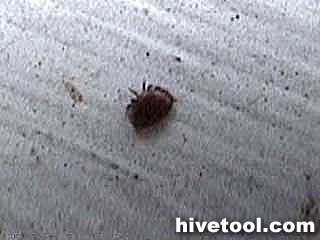 Bees are susceptible to infectious diseases of both brood and adult bees. There are also two types of parasitic mites that infect colonies. They are responsible for large annual losses in bees, honey, equipment and increased production costs.

Here we offer a general introduction to the most common parasites and diseases affecting honeybees.  For more thorough information on these and other disease, parasites and pests, we highly recommend visiting the USDA Bee Research Laboratory or the University of Georgia.

Varroa mites (pictured above) are the most easily observed parasite of honey bees.  They appear as dark, oval disks, often on the thorax of their host.  Varroa mites lay their eggs in brood cells and their young develop alongside the honeybee.  Sampling techniques include pulling out drone pupae to look for signs of infestation.  Apistan (fluvalinate) is widely approved for treatment of varroa.

Tracheal mites are microscopic parasites of the honey bee’s windpipe. The most recognizable sign of advanced infestation is the presence of exhausted workers crawling about on the ground outside of the hive.  Menthol crystals have been shown to be an effective method of control for tracheal mites. Vegetable oil and sugar patties, which can safely be left in the hive  year-round, are also credited with diminishing the ability of tracheal mites to reproduce.

Nosema is a disease caused by the spores of a microorganism that infests the honey bee gut.  Dysentary and fecal matter on the front of the hive is often attributed to this disease.  Other effects include a shortened lifespan for workers resulting in a diminished hive population. The most common treatment for nosema is Fumadil B (fumagillin), fed to the colony through a sugar syrup medium.

Both types of foulbrood are caused by bacteria.  The danger of infection from used equipment is so great because AFB spores can remain dormant on equipment indefinitely. Common symptoms of AFB include the “meltdown” of pupae after being capped, leaving a brown goo that exhibits a “ropy” characteristic when pulled from the cell.  The pupal tongue can often be observed  sticking from the bottom of the cell.  Perforated and/or sunken cappings can be observed in the advanced stags of infestation.  Unfortunately, because of the virulent nature of AFB, infected colonies often must be burned to prevent contamination of other colonies.  Regular treatment with the antibiotic Terramycin© may prevent AFB infection.

Unlike AFB, EFB usually kills honey bee larvae BEFORE they are capped.  the bacteria responsible for EFB do not produce long-living spores as does AFB so contamination through equipment is not as serious a problem.  Terramycin© is also an effective preventive measure for EFB.