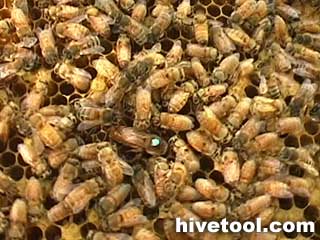 Requeen a honey bee colony every year for better performance and production. The serviceable life of 99 percent of the queens is exhausted by the end of her second year in the colony. Requeening every other year is the least desirable practice. When the aged queen fails during the stress of the spring buildup, the colony
organization becomes disrupted and the colony is nonproductive.

Order queens from a reputable breeder with a good line of bee stock. Place your orders well in advance so the breeder may raise the number of queens you need and mail them to you on the date you request delivery.

August is a good month to requeen a colony. When queens are introduced in August and not accepted by a colony, there is time to reorder and introduce the second queen to the colony.

When you are inspecting colonies in July or August, locate the queen and confine her to the lower brood chamber with a queen excluder over this chamber. When your queens arrive, you will have reduced the time required to find the queen in the colony.

When the caged queens arrive, remove the paper over the screen and place two or three drops of clean water on the screen away from the candy. Place the queen cages in a cool dark room until you are ready to introduce the queens into the colonies.

Remove the cork from the end of the cage to expose the candy which seals the queen in the cage. Place the queen cage in the shade near the hive into which the new caged queen will be introduced.

Open the hive and locate the queen. She is usually on a frame with young brood and eggs.

Remove the queen from the hive. Introduce the new caged queen into the hive by placing the cage screened side down on top of frames of brood.

Feed the colony a one to one sugar syrup to which two to three drops of vanilla extract has been added.