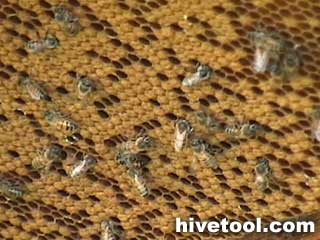 A strong colony preparing to swarm can be divided or split into two, three or four colonies. You will need one capped queen cell or one caged queen for each of the colonies started by the divisions. Wait until you have capped queen cells or caged queens to introduce at the time you divide the colony.

Prepare the hive equipment you will need for the divisions or splits. Prepare one gallon of a one to one sugar solution to feed the colonies after you make the divisions. Place the prepared hives on bases in your bee yard.

Open the hives you prepared for making the division and remove five frames from the center of the brood chamber. Open the colony you will divide. Check the brood nest and locate the queen. Transfer the queen, worker bees and the brood frame she is on to one of the prepared hives. Inspect the other brood frames for queen cells and place two or more frames of capped brood without queen cells into the hive with the queen.

Transfer enough young bees from the brood nest area to cover the brood frames of the colonies you start. The older field age bees will usually return to the hive on the original location.

Inspect the other brood frames in the original colony for queen cells. Select the largest capped queen cells and transfer one or two cells on brood frames with worker bees into the colonies you are starting. Transfer two or three frames of brood and worker bees into each colony. Destroy any queen cells you will not need. The new queens for the colonies will emerge from the selected capped queen cells. A queen should mate and begin laying eggs within 13 days after she emerges in warm weather.

Add the equipment needed to complete the hives you start. Add frames of foundation or drawn comb to fill the hive bodies or supers. Add a super or hive body of frames above the brood chamber.

When you introduce caged queens, feed the bees a sugar solution with two to three drops of vanilla extract added. Place a few drops of this mixture on the queen cage and sprinkle some on the frames of bees.

Three days after introducing a caged queen, check the queen cage to be sure the queen has been released. Do not look for her if she is out of the cage for 10 days.

Punch a small hole through the candy with a toothpick to help the bees release the queen, but do not release her if she is not out of the cage in three days.