Transferring a Colony to Modern Equipment 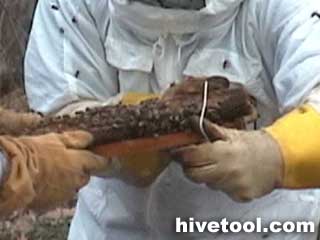 Honey bee colonies in box hives without movable frames cannot be inspected or managed efficiently. These colonies should be transferred into standard, legal, equipment with hanging; removable frames. Early April is a good time to transfer a colony from a box hive to a modern standard hive. The combs should not contain a large surplus of honey. The field bees will be working and the colony will adapt to the new hive before the beginning of the honey flow.

A bottom board (complete with an entrance reducer), two brood chambers or deep hive bodies each with 10 frames, (some frames of drawn comb, some with wired foundation, some frames without either comb or foundation), an inner cover and an outer cover will be needed. A hammer, hive tool, a smoker, strong cord or rubber bands, a pan of clean, warm water, an empty, clean pan or bucket to salvage honey and a sharp knife are the tools you will need to make the transfer. Move the old box hive off its location and place it on the ground 12-15 feet away. Place the new hive on the exact spot where the old box hive was located.

Turn the old box hive upside down and remove the bottom. Place one of the hive bodies with frames of comb and foundation on top of the inverted box hive. The hive body and the old box hive should fit together without opening or cracks. Seal the two units to prevent bees from exiting. Smoke the box hive and tap on the sides with a hammer. Continue smoking and tapping (drumming) to drive the bees up into the new hive body. Drive all the bees up into the new hive body and then place this chamber on the bottom board on the old location. Cover this hive body with an inner and outer cover.

Carefully search for the queen as you remove the comb from the box hive.

Feed the colony one part sugar to one part water sugar syrup to stimulate egg laying and drawing of comb. Stored honey salvaged from the colony can be used to feed the colony.

Small colonies that cover less than seven or eight frames need time to become established and draw out the frames of foundation. A small colony with a prolific queen will expand and need the second body about 30 days after being transferred.

Remove all of the old hive parts from the apiary and destroy them.