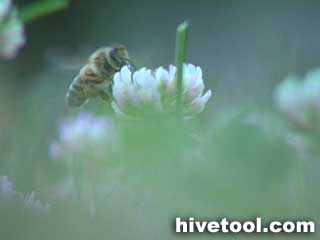 Inspect the brood chamber. The top hive body (Fig. 20) or super will be filled with brood and bees in early March. The bottom hive body will contain frames of empty comb.

Reverse the positions in two weeks when the queen is in the top brood chamber laying eggs.

Remove the entrance reducer after Easter.

Mix 6½-7 pounds of granulated sugar in 1¾ quarts of hot tap water. Dissolve the sugar. Do not boil.

Using a small frame nail, punch 12-15 holes in the center of a friction top pail.

Fill the pail with the sugar syrup and close the lid. Invert the pail of sugar syrup over the opening (Fig. 23) in the inner cover (inside an empty super).

Place the outer cover over the super to close the hive.

Feed this sugar solution 10 the bees in early March and April. Begin this feeding when you reverse the brood chamber in the first two weeks of March.