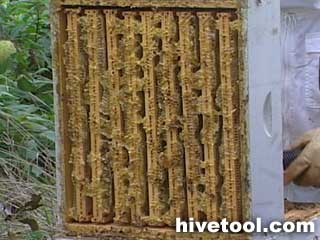 Prepare supers with clean frames and walls and foundation in the frames. These supers will be needed in April, May and June when the colony produces surplus honey.

The black locust trees, clover and yellow poplar trees will begin to bloom in late April. The bees will need storage room for the surplus nectar about one week after the plants begin to bloom.

Open the colony for inspection and add one or two supers as you close the colony.

A super that has been used for winter feed will frequently have brood reared in the combs turning them dark. This super can be used by the bees to store another super of honey to feed back to the colony next winter. This super will be on top of the brood chamber and the bees will begin to fill it first. When this super is one-half to three-fourths full of nectar, remove it from the colony. Place one or two supers on top
of the brood chamber and place the partially filled feed back super on top of these supers. Close the colony.

Adding supers one or two at a time will give the bees the space needed to store surplus nectar to be cured into honey. Keep at least one super ahead of the bees during a good nectar flow.