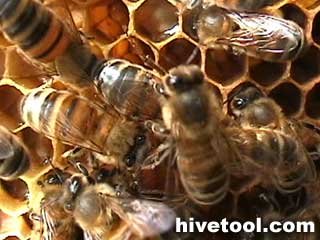 A colony of honey bees will over winter well when you prepare them for winter conditions. The colony must have enough bees to cover five or more brood frames. Smaller colonies usually will not survive the winter.

A young prolific queen introduced into the colony in August lays a large number of eggs during September and October. The young bees emerging during the fall maintain the colony through the winter.

Give the bees comb space for storing nectar and pollen in September and October. Remove the empty supers and store them under fumigation after mid October. A colony should have either two hive bodies and one super or one hive body and two supers during the winter. The upper hive body and the supers should be filled with honey.

A colony should have at least 40 pounds of honey in mid October for winter stores. This is equal to one full super and six frames in the second super. One hive body filled with honey weighs about 60 pounds.

Check the brood chamber for a laying queen and healthy brood in early October. Treat the colony three times at weekly intervals with Terramycin in sugar or once with Terramycin extender patty. Treat with Fumidil-B in November. Give a colony one gallon of the Fumidil B medicated syrup.
Reduce the entrance opening by inserting the entrance reducer in early
October.

Ventilate the top of the colony in November (Fig. 51) to vent excess moisture from the colony during the winter months. Vents and exits can be made by cutting slots 5/8 inch or wider through the inner cover cleat. Turn the slotted inner cover upside down -cleated side down and slide the outer cover forward over the hive.