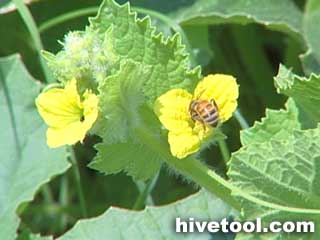 Comb honey: honey produced by bees in small rectangular boxes and sold in this form

Drones: male bees. Their main function in the colony is to fertilize the queen

Foundation: thin sheets of beeswax imprinted with the pattern of honey cells by metal rollers then it is processed. These sheets are fastened into frames as “starters” for the bees in making the combs.

Frames: the removable wooden structures which are placed in the hive bodies and supers. Bees build their combs within these forms.

Hive body: first two boxes placed on the bottom board. The hive bodies will contain the brood nest of the colony.

Larva: grub-like, immature form of bee, after it has developed from the egg and before it has gone into the resting stage in preparation for the change to adult form

Nectar: sweet fluid produced by flowers and converted into honey by bees

Pollen: very small dust-like grains produced by flowers. These are the male germ cells of the plant.

Propolis: brownish gum gathered by bees from trees and buds. They use it to close openings in the hive.

Pupa: immature form of bee during the resting stage while changing to the adult form

Royal jelly: milky white secretion of young nurse bees that is fed to queen larvae throughout their lives, and to worker and drone larvae only during their early larval lives

Super: supplementary boxes placed on top of the hive body for storage of surplus honey

Supersedure: when a colony with an old or failing queen rears a daughter to replace her

Workers: incompletely developed female bees that do not normally lay eggs. They gather nectar and convert it into honey and take care of the immature bees.