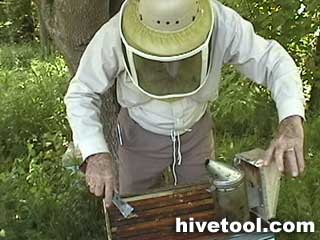 Beekeeping is a pleasing and profitable occupation. Whether as a professional with several hundred to several thousand hives, or the owner of a single colony of bees, the beekeeper will experience year-round satisfaction watching honey bees build and maintain their colonies. This publication describes the nature and behavior of honey bees and shows the beginning beekeeper how to house and maintain a colony of bees.

Honey bees are social insects. They live in colonies that can grow to over 60,000 individual bees. Each colony is a model of social order in which every member has its appointed task. A colony consists of the queen, who lays and fertilizes the eggs; the drones, whose only function is the fertilization of a virgin queen; and the workers; whose lives are devoted to the survival and welfare of the colony.

Let’s take a closer look at each of these members of a bee colony – their appearance, their development patterns and their functions in the hive.