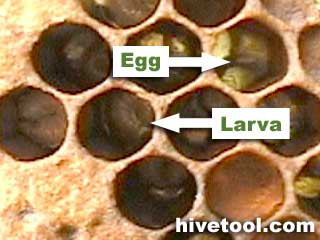 Pry the outside frame of the brood chamber loose. Remove the frame from the body. Hold the frame in front of you with one hand on each end of the top bar. Observe the bees and the comb.

Inspect the brood frames for:

Eggs laid by the queen stand on end in the bottom of the cell, one to a cell; two or more eggs up on the sides of the cell are from a laying worker.

A prolific queen will have a laying pattern of brood with very few skipped cells over most of the frame.

Honey stores in a colony should be at least six super frames or three deep brood chamber frames completely filled with capped honey. These frames will hold 15-18 pounds of honey.

Remove and inspect all of the frames that contain brood. After inspection of a frame, place it in the hive body toward the side from which you removed the outside frame or follower board. Keep the frames pushed together to give you space for inspecting the next frame.

When you have completed your inspection, replace the frames in their original order and close the hive.

When you open a colony for inspection, you can feed, treat with antibiotics, requeen, replace damaged combs with foundation, add an empty super or remove a super of honey. Prepare the items you need in advance and have them near when you open the colony.