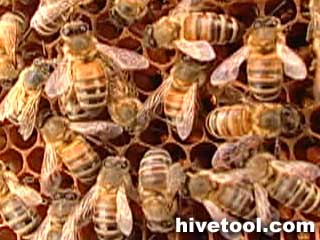 Honey bees exhibit many geographical variations in color and behavior. Several of these have become well known and are the most “common” honey bees. Most races may be divided into two general groups, the black or gray bees and the yellow bees.

Early colonists brought the black or German bees into the New England states. This race, Aphis mellifera mellifera, was also the first honey bee to be introduced to California and the Pacific Northwest. The blacks were, however, not prolific and were generally considered to have a mean disposition. They have gradually been replaced by the yellow Italian bees, the most popular race of bees in America today.

Italian bees have from three to five bands of yellow on the abdomen, bordered with black. The rest of their body is colored by varying shades of yellow. Those with three bands are sometimes called leather-colored Italians; those with five bands, golden. Italian bees are prolific, industrious and generally better disposed toward the beekeeper than German or black bees. German bees are much more nervous, scrambling widely when the hive is opened. The Italians by contrast are quiet on the combs, hence it is much easier to find the queens.

A race of bees known as the Caucasians appears in two strains, one black with soft gray hair, the other yellow, resembling the Italians. Caucasian bees are frequently used in the Southeastern U.S. Sometimes described as the gentlest of all honey bees, Caucasians go peacefully about their affairs. Caucasians have a tendency to construct excess burr comb and use large amounts of propolis.

Although they have many supporters among beekeepers, the race of bees known as the Carniolans are relatively uncommon. Carniolans are dark with grayish rings on the abdomen resembling the gray Caucasians. These bees increase rapidly in the spring and swarm excessively. They are generally gentle. It has been assumed by beekeepers and others that aggressive, difficult to handle strains of bees tend to be good honey producers. However, experimental evidence has not established a correlation between temper and honey production.

In recent years, hybridization of races has produced numerous hybrids, some of which have gained widespread acceptance with beekeepers. The buckfast and midnight hybrids are examples of those widely accepted crosses.