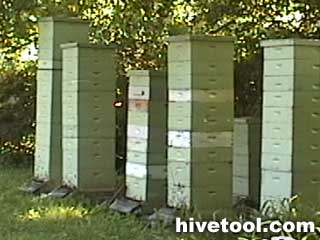 Originally, the honey bee colony made its home in a hollow tree or log, fitting the wax comb to the shape of the cavity. The modern hive consists of a series of racked, movable frames. These frames are separated by a scant 5/16 inch of space, barely enough for the worker bees to pass through. This critical dimension, referred to as “bee space,” was discovered in 1851 by Lorenzo L. Langstroth, the “father of American beekeeping.” Langstroth observed in any space larger than 5/16 inch, bees will build irregular comb called burr comb, and they will seal up with propolis any space smaller than 5/16 inch. Using the principle of bee space, Langstroth developed the top-opening, movable frame hive which has changed little in over 100 years.

Until the invention of the movable frame hive, honey production was not very profitable. Bees were kept in box hives or skeps, conical hives of twisted straw familiar in depictions of older beekeeping. The chief advantage of the movable frame hive is that the beekeeper can tell the condition of the colony from week to week during the active season. The invention of embossed wax foundation, and the radial extractor later in the 19th century made it possible to re-use combs, saving energy for both the bees and beekeepers.

Hives should not be set directly on the ground. Some sort of hive stand made of bricks, tile or preservative treated wood should be used to elevate the bottom boards from the ground.

The most popular hive has frames measuring 9 1/8 by 17 5/8 by 1 3/8 inches. It is best to purchase machine-cut frames. You will be able to move them from one hive body to another. Machine-cut hive bodies are also desirable for the beginning beekeeper. If you build your own, be sure the inside dimensions are accurate; otherwise, the frames will not fit. In a 10-frame hive, the inside dimensions should be 8 1/4 by 14 5/8 by 9 1/2 inches.

Although 10 frames will fit in this hive body, it is a common practice to use only nine frames and a follower board. This facilitates the removal of frames during a colony inspection. Bees build thicker combs when nine frames are equally spaced in a standard 10-frame super. The thicker comb extends beyond the edge of the wood frame easing the job of uncapping the honey for extraction.

Full sheets of wax foundation are provided in the frames in a modern hive. Cell bases are molded to specific dimensions to encourage the bees to build worker cells. These worker cells are six-sided, measuring about 5½ cells to the linear inch. In natural honey comb, the bees always form more drone cells than necessary. They are the same shape as worker cells but larger, measuring four to the linear inch. The use of full sheets of foundation on the brood frames, rather than partial strips, encourages the bees to draw out worker comb and decreases the production of drones. Even with full sheets of foundation, the workers will draw out a number of drone cells, especially in the corners and around the edges of the comb.

In the brood chamber, the outside frames are likely to be filled with honey. Toward the brood nest, usually located centrally, many cells are filled with pollen. This area contains thousands of cells with larval bees in various stages of development. Here, the main activities of the colony are conducted. Early in the spring, the brood nest may be only a few square inches. In a prolific colony, the brood nest in the early summer will expand to two hive bodies and will contain from 10-15 frames with brood