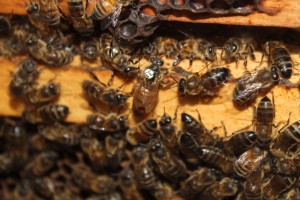 The queen is the most important member of the hive. She is reared in a special cell shaped somewhat like a peanut that is usually suspended vertically from the lower part of the comb. Queen cells are larger than regular cells. The queen develops from a fertilized egg (as do the workers), but she is fed throughout her larval life with royal jelly, a glandular food secreted by young workers known as nurse bees. She is given sample feedings of this jelly and develops more quickly than either the workers or the drones. 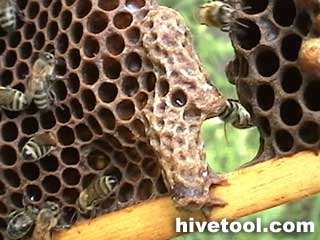 Normally, the egg-laying queen is much longer than the workers or the drones. Because she has a longer abdomen, her wings appear shorter and her thorax slightly larger than the same parts on workers’ bodies. Her thorax, however, is smaller than that of a drone.

She does not have pollen baskets or wax glands. Her sting is stouter than the workers’, has fewer and shorter barbs and is curved. She rarely uses her sting except when she emerges from her cell and encounters other queens in the colony. In this event, the young queens battle until only one remains.

The queen bee has fully developed ovaries and is the only bee in a colony that is capable of fertilizing the eggs she lays. Five to 10 days after emerging from her cell, the queen takes one or more flights and mates with drones in the air. She mates with enough drones to provide her with a sufficient quantity of sperm. The sperm she receives from the drones, normally 12-14, is stored within a special organ in her abdomen called the spermatheca. Once her spermatheca is full of sperm, she will never mate again.

At first, the queen lays only a few hundred eggs each day. Later in the spring or early summer, she can lay up to 2,000 eggs or more in a single day. She deposits the eggs in rings, radiating out from the center of the brood frame. Worker bees reach maturity in 21 days. As workers mature, the cells are cleaned and the queen deposits new eggs. Drone eggs are laid early enough in the spring and summer to provide adult drones by the time a colony normally would swarm. The queen can lay worker or drone eggs at will. But when there is a shortage of nectar and/or pollen, the rearing of the brood is slowed down or even stopped.

The following chart shows the number of days required for the development of the worker, the drone and the queen. These periods will vary with temperature of the brood nest, but rarely by over 24 hours.

The queen fertilizes the eggs that will develop into worker bees as she deposits them. Consequently, worker bees have characteristics of both the queen and the drones with which she mated. Unfertilized eggs, which she deposits in the larger cells, become drones. Drones bear only the characteristics of the queen herself. It can be said a drone honey bee has a grandfather but no father.

The queen may live as long as eight to 10 years. In production colonies, unless replaced by the beekeeper, queens will normally be replaced (superseded) after their second or third year. As a queen ages, she gradually uses her supply of sperm and may lay an increasing number of drone eggs. If she fails to mate, all of her eggs will be unfertilized, hence males, and she is then known as a drone-layer.