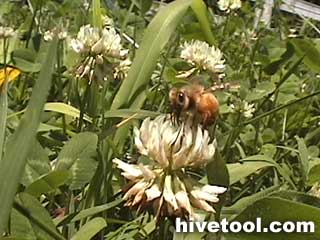 The worker bees, although females, lack the fully developed reproductive organs of the queen. Normally they do not lay eggs, although if the colony is without a queen, or queen cell, a few workers may begin to lay drone eggs. A colony in such a condition is termed a laying worker colony.

The worker bees perform all the labor of the hive. They are equipped with “pollen baskets” on their hind legs and special wax glands which begin to function when they are approximately 10 days old.

The lives of the worker bees fall roughly into two periods. During the first period of approximately three weeks, they are called hive or house bees. On emerging from their cells, they groom themselves and engorge on honey and pollen from the storage cells. Their first three days are spent cleaning out brood cells. Thereafter, they clean the hive, feed the older larvae and then the younger larvae, take orientation flights, evaporate nectar, build comb, feed the queen and the drones, keep an even temperature in the brood nest and guard the entrance to the hive, altogether a busy schedule. It is biologically known as a division of labor dependent upon the age of the individual bee, but it is very flexible. The last half of a worker bee’s life is devoted to foraging duties outside the hive. Four items collected outside the hive are pollen, nectar, water and propolis.

Bees produce the beeswax used in the construction of their combs from four pair of wax glands located on the underside of the abdomen. These glands are most highly developed and active in bees 10-18 days old. The wax appears in small, irregular oval flakes or scales that project between the overlapped portions of the last four abdominal segments. Wax can be secreted only at relatively high temperatures and after a large intake of honey or nectar.

Propolis, also known as bee glue, is a resinous, reddish-brown substance gathered by the bees from gum found on trees and buds and is used to close small crevices in the hive. It is very sticky in warm weather and brittle in cold weather.

During the active season, the lifetime of a workers is five to six weeks. Overwintering worker bees may, however, live for four to six months. Whatever their life span, worker bees usually confine themselves to one task at a time working without pause. If they are field bees, they may be scouts or collectors. Scouts look for sources of nectar and pollen. Once suitable sources are located, additional foragers are recruited by the scouts. Nectar collectors, pollen foragers, water gatherers or propolis carries work so single-mindedly at their jobs, they will not stop even to collect honey placed before them. During the day, one may see hundreds of spent workers, wings ragged, returning wearily to the hive. Worker bees are aptly named as they literally work themselves to death. Death occurs following approximately 500 miles of flight.